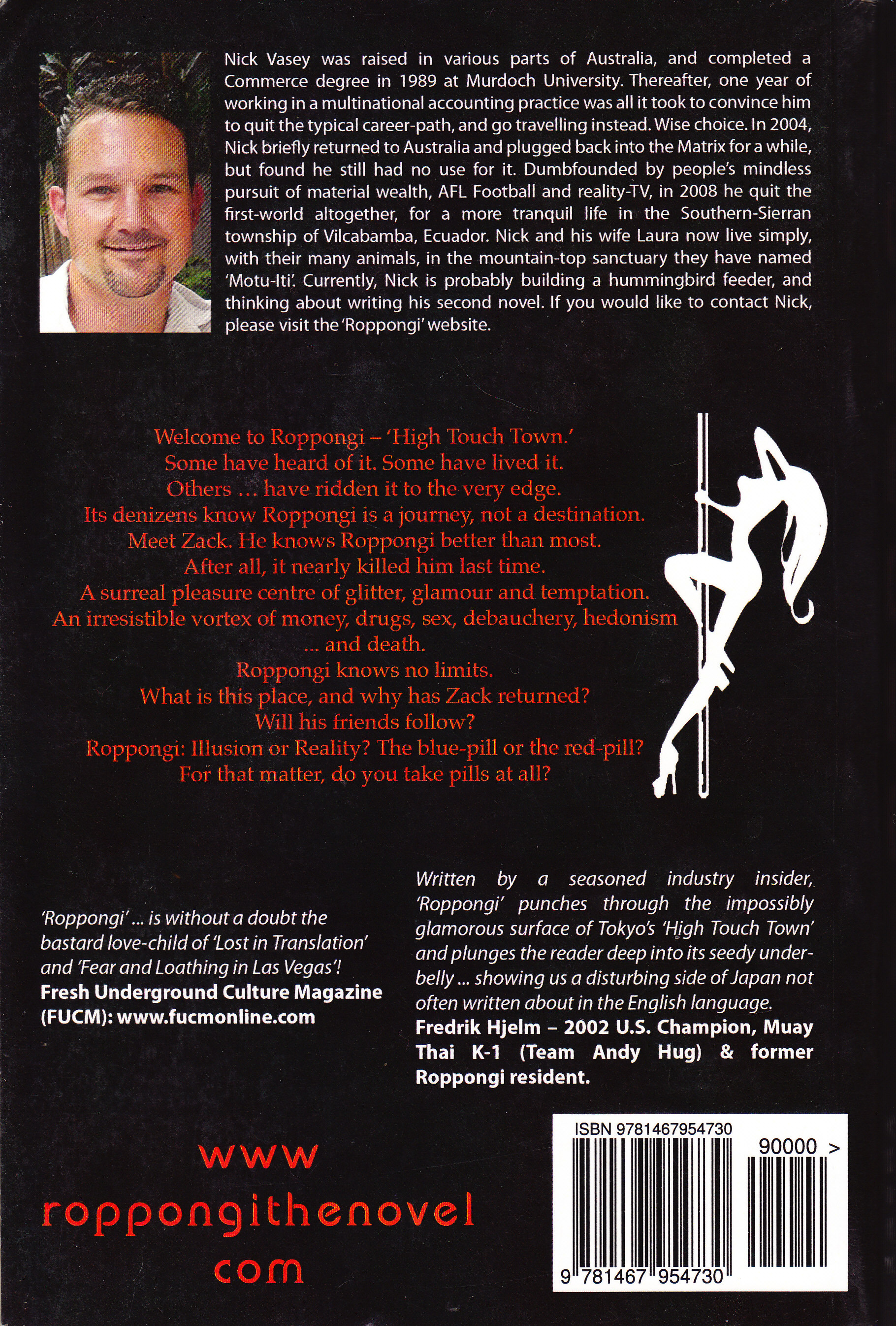 'Roppongi' is an 'adventure-travel-fiction' story, exploring the crazy and often dangerous world which is living and working as a foreigner in the nightlife industry of Roppongi, Tokyo, Japan. The novel follows the (mis)adventures of its travel-addicted protagonist, Zack, and in that respect is similar thematically to Alex Garland's 'The Beach' or Gregory David Roberts's 'Shantaram'. Accordingly, the reader is viscerally transported into the surreal realms of Roppongi, as Zack attempts to come to terms with a series of life-changing events unfolding at rapid pace. In the process, the novel punches through the impossibly glamorous surface of Roppongi, and plunges the reader deep into its seedy underbelly ... showing a disturbing side of Japan not often written about in the English language.

For those who don't know, Roppongi itself is a couple of square miles in Tokyo, which, although changing drastically today, has for many years been an area dedicated to hedonistic nightlife pursuits. Clubs, bars, strip-clubs, hostess-clubs, restaurants, fast-food, casinos, street-sellers, all-night dance parties, breakfast clubs, etc. You probably get the idea. The distinguishing feature of Roppongi is that it has for a long time been the default destination for probably around 90% of the foreigners in Tokyo who head out to party.

Something very different happens in Roppongi. Something weird. There is a different vibe to any other place in the world. It feels like anything could happen. For whatever reason, people tend to push the boundaries harder, in all directions. There seems to be unlimited amounts of money, alcohol, drugs ... and many beautiful and interesting people hell-bent on using them to excess. Working the nightlife scene in Roppongi becomes sort of like a planet you live on for a while. And because there's not much downtime, you don't see much of what's happening on other planets. You just go where the Roppongi planet takes you. And believe me, it goes to some interesting places!

Sex is everywhere. Whether hinted at, or trumpeted, or simply sneaking up on you unexpectedly, it is an omnipresent force. Night in and night out, Roppongi is a violent sea of over-eager libidos just waiting to engage. Hostesses, strippers, dancers, models. Bar-workers, croupiers, managers, and door-staff. And they're just the folks working Roppongi! Then you have the clients. Ex-pats and Japanese alike, all out for the wildest time they can possibly find. Many different nationalities, many different 'drivers', many different moral, social and cultural codes all collide in a melting-pot of hedonistic madness which stretches itself out to daylight and beyond.

In fact daylight is where the 'night' often starts for those 'industry-folk' working Roppongi's bars and clubs. After-hours clubs, more or less dedicated to serving Roppongi's hard core industry people, blossom at dawn. And after working for twelve hours or more, then venturing into these twilight zones, (zones usually hidden from everyday people), reality starts to bend, and you may quickly find youself on the other side of the looking-glass, somewhere decidedly odd. There is simply no telling where you might end up, who you might get hooked up with, or how it might turn out. The Roppongi life is a cosmic game of craps, and the dice land where they may.

Since the 80's, tens of thousands of people who've experienced the inspired madness of living and working in Roppongi's incomparable nightlife scene have shaken their heads with disbelief and said, "Someone should write a book about this place." Well, someone finally has!

In short, Roppongi had an undeniably profound effect on my life, and it was this which drove me to write the novel. It is a story which needed telling. To my knowledge it is the first English-language novel which deals in any depth with the cultural melting pot of opportunistic foreigners chasing a fast buck in Roppongi's 'mizu-shobai' (water-trade). Cinematically speaking, the specific themes and environmental context of the characters and events which take place in Roppongi have not really been touched on before in any film I'm aware of.

The Roppongi experience holds an incredibly special place in my heart. And I know the thousands of other people who have run Roppongi's gauntlet over the years feel the same way. Roppongi scars people. In good ways and bad. It gets under your skin, and stays there. And as with all the best drugs, life inevitably seems dull after Roppongi. But make no mistake - it makes you grow. You are different at the end of it. I had two of the most incredibly fun and intensely mad years of my life there. I met many extraordinary people from all walks of life. The closest I can come to describing it succinctly is that it was like living in a movie. A very fast-moving, unpredictably surreal blur of a movie. There was no off-switch. During this hyperactively hedonistic time I made lifelong friends under the most outrageous circumstances.

The Roppongi diaspora now spreads all over the world; members enjoy a special bond of understanding, of shared experience. Doing Roppongi justice in print was always going to be a daunting task. For there are uncountable 'Roppongis' - everyone's Roppongi was 'their Roppongi'. So for those who took the trip like I did, I hope my Roppongi takes you back there. And for those who didn't, I hope you enjoy the ride!